Warning: "continue" targeting switch is equivalent to "break". Did you mean to use "continue 2"? in /nfs/c06/h01/mnt/88637/domains/blog.irockcleveland.com/html/wp-includes/pomo/plural-forms.php on line 210
 I Rock Cleveland I Rock Cleveland | “Ghost in the Trees” and “Graveyard Drug Party” by Thee Oh Sees 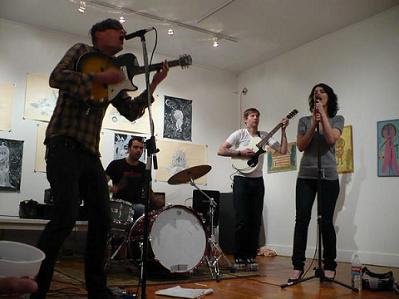 Although Thee Oh Sees are an American band, as American as mom, apple pie, baseball, and Brittney Spears, there’s something strangely alien about their sound. Lead Oh See, John Dwyer delivers his lines in a monochromatic, almost robotic tone, while Brigid Dwyer’s harmonies come through as if they had to first travel through an old analog phone headset. Then, there’s the music, a combination of garage rock and surf rock, fuzzed up and blasted out of worn speakers. When these elements are combined, it’s as if Thee Oh Sees are from outer space, or French, but not real outer space, rather, the Sixties outer space with go go boots, silver suits and ray guns, and not really French, but faux French. Thee Oh Sees are an American band.

Thee Oh Sees will be in Cleveland for a show October 1st at Pat’s in the Flats.