C’mon Get Heavy with F*cked Up 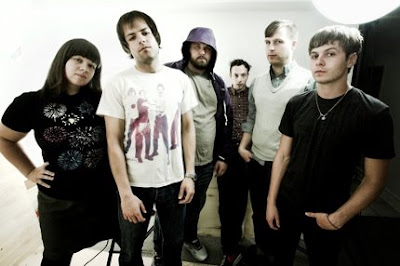 Over the past couple years, Fucked Up have built up a reputation as being one of the most forward thinking and most progressive, modern punk bands. First, there was the more epic than f*ck, 18+ minute “Year of the Pig,” single, released last year on What’s Your Rupture, and expanded and repackaged by Matador earlier this year. That was followed by “No Epiphany,” the first track to surface from their forthcoming coming album, “Chemistry of Common Life,” which answered the question no one ever pondered: What if Genesis went through an early 80’s hardcore phase instead of their “Invisible Touch” phase? Yet, in spite of their recent dalliances with prog rock, Fucked Up, were, and still are, a hardcore band at heart. Even if Chemistry of Common Life opens with a flute solo, and it does, songs like “Twice Born” prove, they haven’t forgotten how to shred, stomp, and rock an old 1-2-3-4. There’s no flute on this one, and no hints of Rush, Genesis, or Jethro Tull. Just modern punk the way modern punk should be played — dirty, grimy, and from the streets.

The Chemistry of Common Life by Fucked Up will be out October 7th on Matador Records. The band have a lengthy tour scheduled for the fall, but sadly, no Cleveland date.

Previously on IRC: “No Epiphany” by F*cked Up