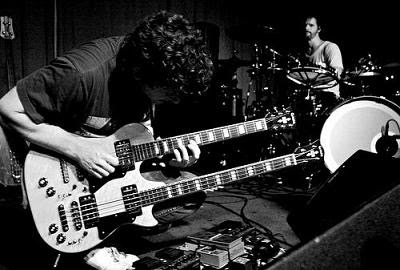 Ten, Fifteen years ago, I’d hear a band like the LA instrumental rock duo, El Ten Eleven, and think to myself, “I hope these dudes never sell out.” Today, when I listen to El Ten Eleven, I think to myself, “These dudes could sell every song on their album for car commercials.” My, how things have changed. Selling out isn’t the evil it once was, not with album sales perennially in the sh*tter and radio growing more stale with each passing day.

Sometimes El Ten Eleven’s krautrock vs acrobatic guitar slinging thing fits visions of the open road, superior German engineering and precision handling. Other times, it’s the sound of two dorks tooling around town in a new sub compact and their misadventures in the city. In “I Like Van Halen Because My Sister Says They Are Cool,” you get a little bit of both. A motorific beat lays the foundation of the track, while the melody alternates between pulsating and playful, meaning if I was the ad man working on the Volkswagen Gulf campaign, I just found the perfect musical accompaniment.

El Ten Eleven will be returning to Cleveland for a show at the Beachland Tavern on Friday, November 2nd. Their self released album, These Promises Are Being Videotaped is out now and can be purchased through the band’s website.