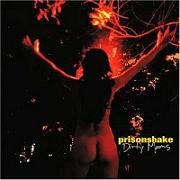 A lot has changed in the 15 years since the Cleveland-born band, Prisonshake, released their last album, 1993’s The Roaring Third. Just spend one hour watching vH1’s I Love the Nineties, I Love the Nineties 2, or I Love the Nineties So Much We Can Make a Third Series About It, and you’ll quickly realize those were much different times. Bill Clinton was just taking office as president, the World Wide Web was still only used by scientists and geeks, and American rock music was dominated by flannel shirts, Doc Martins and Seattle grunge acts like Soundgarden, Alice in Chains, Pearl Jam, and Nirvana.

For guitarist Robert Griffin and vocalist Doung Enkler, the two holdovers from Prisonshake’s early days, those were much simpler times, too. You can almost smell the nostalgia of stacks of wax and cigarette smoke, on Dirty Moons’ lead single, “The Cut Out Bin,” when Enkler sneers its pointed opening lines over Griffin’s rigid and twisted guitar riff, “Back in the day before songs were numbered/And only bikers and sailors had tattoos/I’d work all day selling records to a**holes/Huffing boo and f*cking you.” Oh, the good old days, when rockers rocked, to be independent really meant something, and exiting a record shop with your self esteem in tact was no easy task.

However, “The Cut Out Bin,” isn’t just about being an a**hole and getting away with it, it’s also a statement on the disposability of today’s music, the accelerated album cycle, and the wreckless prose of today’s critics. Can you really blame The Shake for their choice to spend the better part of the past two decades on the sidelines, when, as Enkler puts it, “No one gets a twilight to their career any more/No one gets the chance to make/Mediocre record number four?” But fifteen years for a record? Fifteen years is a long f*cking time. Granted, these days aren’t the best days to release a record, but FIFTEEN YEARS!

To hear Griffin tell it, there wasn’t just one reason why Prisonshake’s Dirty Moons took on a Chinese Democracy-like life of its own. Sure, its double album format didn’t help things, but in addition to its sheer length, and the work associated with recording 22 tracks, its delay was caused by everything from complacency, disillusionment, perfectionism, cynicism, and idealism, to simply being an adult, and taking care of adult-like responsibilities.

When you consider Dirty Moons’ size and scope, it’s only human to approach it with a considerable amount skepticism. While it may seem like no one gets the chance to make their fourth album these days, (or in Prisonshake’s case, their second, or third album, depending on how you arrange their discography), we’ve all been burned by self-aggrandizing double albums before, and we’ve all heard the work of perfectionists who’ve tweaked their albums to the point of folly.

Dirty Moons’ all analog recording and limited compression means it pops out of the speakers crisply and clearly every time, and its volume — spread over 2 cds, or four sides of vinyl, with four different entry points, all ensures a diverse listening experience. Even if you go against the liner notes, and start with side one track one every time, there’s so many sounds to process, that you’ll continually hear something new.

As Griffin leads his band through any variety of styles, including avant, art-rock (“Fake Your Own Death”), two shots and a stack of amps barroom rock (“F*ck Your Self Esteem” and ‘”You’re Obviously The One,”‘) and hard charging, punk fueled aggression (“Crush Me” “Favorite Hospital” and “I Will Comment,”) one constant is his guitarwork. It’s so dynamic it’s almost a liability. On “I Will Comment” there’s a passage that sounds as if it was lifted straight from one of Boston’s solid gold radio hits. While, “We’ve Only Just Tasted The Wine,” with its hot, Southern guitar licks, comes off like having your Wilco with a side of Skynyrd. Other times, his riffs recall the jarring, abstract work of Thurston Moore and J. Mascis. And in some cases, as on Disc 2’s, “The Year of The Donk,” Griffin covers all these styles and more. Here he uses The Stones’ “Gimme Shelter” as a starting point, and proceeds to cover some 40 years of modern guitar (classic rock, punk rock, art rock, even jazz fusion) in one song. Indulgent? Yes, but you have to give the band credit for having the balls to step out of genre, out of their comfort zone, and believe in themselves enough to leave it all out there for the listener.