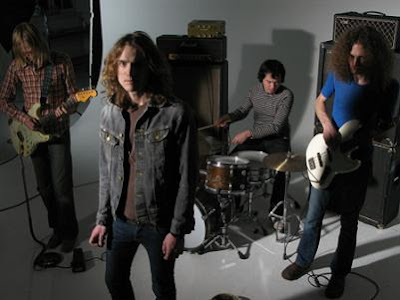 Being a single-lingual American, I haven’t the slightest idea what the Swedish band Dungen are going on about in “Satt Att Se.” This could be their 10th ode to their long lost pet cat, Furry Mae, and the loss still hurts so much, that they composed a lone, winding guitar solo for her. Or, maybe not. The language barrier, Dungen singing in Swedish, me being a dumb American and only understanding American, and the bits of Spanish I’ve picked up watching futbol on the Spanish channel, means that any emotional connections made to their music come from how words are said and how the guitars, keyboards, and drums are played. Still, there’s a certain sense of loss that permeates “Satt Att Se.” The music talks in mournful tones. The keyboards speak in grey skies, the drums step with a weakened gait, and that guitar solo, the one that’s probably not dedicated to Furry Mae, stings of someone who’s seen better days. It plays like a tear running down the cheek, or a mouth that hasn’t the right words to speak.

4 by Dungen will be out September 30th on Kemado Records.