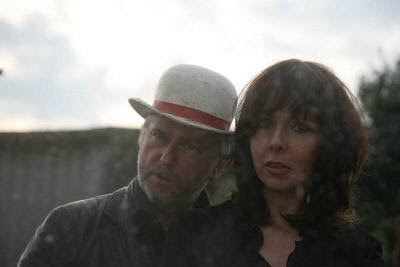 The short version of when Eric met Amy goes something like this: Wreckless Eric (he of Stiff Records and “Whole Wide World” fame) met the singer/songwriter Amy Rigby while she was living in Cleveland and he came through on tour. They fell in love, moved to France, and made an album together. A really good album, I must add. I’m sure there’s lots of ins, outs, and what have yous, and it wasn’t as simple as guy meets girl, guy and girl fall in love, and guy and girl make songs together, but that’s where the album comes in. You can consider it a document of where Rigby and Eric have been and where they’re going. There’s doubt, confusion, and ultimately, excitement from two people who found a whole new world when they found each other.

“First Mate Rigby” is a fuzzed out pop song, and a love song, from two people who’ve been around for a bit. Rigby is “The girl with a past filled with guys with a past,” and a cart to haul around her baggage, while Eric’s the one with “Bags of his own underneath his eyes.” Yet, there’s so much excitement in their voices, and such willful experimentation in its arrangement (The guitar squalor, garbage can drums and thrift store synths give it a real In The Red Records fell) that it could have well been recorded by someone 20, 30 years younger, and no doubt, that’s how they felt as they shouted “I’m a girl. I’m a boy. I’m a girl. I’m a boy” over the song’s exit.

Wreckless Eric and Amy Rigby are playing the Beachland Tavern on Tuesday, September 30th. That’s tonight. Their self titled album is out now on Stiff Records.