Warning: "continue" targeting switch is equivalent to "break". Did you mean to use "continue 2"? in /nfs/c06/h01/mnt/88637/domains/blog.irockcleveland.com/html/wp-includes/pomo/plural-forms.php on line 210
 I Rock Cleveland I Rock Cleveland | Cleveland’s Exit Stencil Records Announces 2008 CMJ Showcase 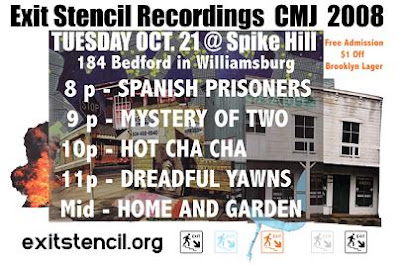 Cleveland’s Exit Stencil Records have announced the details behind their first CMJ showcase. It’s taking place, Tuesday October 21st at Spike Hill in Brooklyn and will feature Spanish Prisoners, Mystery of Two, Hot Cha Cha, The Dreadful Yawns, and Home and Garden. Admission is free, meaning it’s a great opportunity for all of you ex-pats currently living in NYC to catch up with some of the hottest bands in the Cleveland rock scene today and see why I’ve been calling the ladies of Hot Cha Cha the best live act in town.