Warning: "continue" targeting switch is equivalent to "break". Did you mean to use "continue 2"? in /nfs/c06/h01/mnt/88637/domains/blog.irockcleveland.com/html/wp-includes/pomo/plural-forms.php on line 210
 I Rock Cleveland I Rock Cleveland | “Refined” and “Bearfight” by Ten Kens

“Refined” and “Bearfight” by Ten Kens 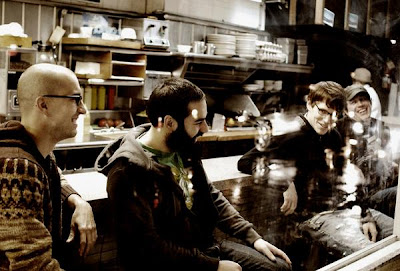 Many of the songs on Ten Kens debut disc follow the same pattern, that is they follow no set pattern at all. You’re never quite sure if they want to be Radiohead, Blur, Boris, Black Mountain, or My Bloody Valentine, and where a song begins is no indication of where it will end. “Refined” begins with early era-Radiohead, as the guitars clip on the off beats and vocalist Dan Workman mumbles his best mouth of marbles Thom Yorke. Later it’s all acid rock keyboards, heavy riffage, and Workman’s evoking the full throated scream of a young Robert Plant. Rough and unpredictable in all the right ways, this is the sound of a band finding direction by refusing to be directed by indie rock’s norms.