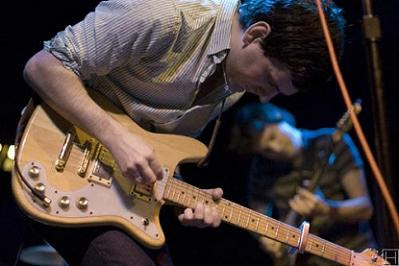 You’ll be hard pressed to find a more accurate approximation of ’90s power pop than Army Navy’s “Saints.” It would fit in rather nicely next to tracks by Matthew Sweet, Jellyfish, The Gigolo Aunts, The Posies, Redd Kross, Zumpano, and the other artists who contributed to the Rhino power pop collection, Poptopia, Power Pop Classics of the ’90s, had it been released, oh, some ten years ago. Hell, if I didn’t know better, I’d swear Don Fleming, the producer behind Teenage Fanclub’s Bandwagonesque and The Posies’ Frosting on the Beater, had manned the controls. I say all of this knowing full well that for some of you describing Army Navy as ’90s power pop means you’ll never click play, but for those of us that like guitars, glistening melodies, and songs about girls, it doesn’t get much better than this one.