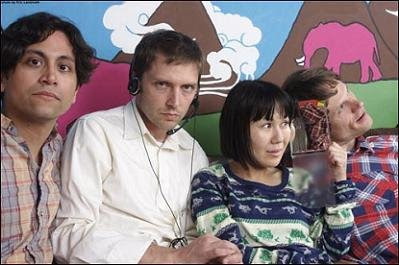 Similar to TV on the Radio, I’ve always considered Deerhoof a band with limitless talent, but also a band who doesn’t always use that talent with the listener’s best interest in mind. Try as I might, I could never get into Deerhoof’s last album, 2007’s Friend Opportunity. All the stops and starts, left turns after left turns, and their oh so annoying habit of blowing apart melodies just when they were getting good, was bewildering.

In politics we’d call this strategy catering to the base. For Deerhoof, their base in recent years has been the music geek. The one who can take the fitful, erratic nature of Deerhoof, make sense out of their auditory overload, and acknowledge musicianship without expecting anything in return.

On Offend Maggie, there’s a perceptible shift in the band. If they find a meaty riff, they stick with it, and when there’s a melody, there’s a good chance they may remember it when the next verse comes around. To the geeks, this may be seen as a step backwards, but for many others, we finally have an in to this wonderfully beguiling band that is Deerhoof.