Warning: "continue" targeting switch is equivalent to "break". Did you mean to use "continue 2"? in /nfs/c06/h01/mnt/88637/domains/blog.irockcleveland.com/html/wp-includes/pomo/plural-forms.php on line 210
 I Rock Cleveland I Rock Cleveland | “Lakeside” by BLK JKS 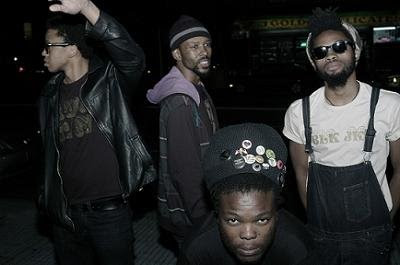 “Lakeside” is the sound of Johannesburg, and Soweto, and South Africa. It’s where BLK JKS’ members were born, raised, and cut their teeth. It’s where they learned how to incorporate the rhythmic, hypnotic sounds of their home land into the often staid structure of American Rock ‘N’ Roll. “Lakeside” is the sound globalization, the good kind of globalization, where ideas are exchanged freely without boundary. Where an unknown band, who couldn’t live in a land further from the minds of American music fans, can be “found” by the right person (Diplo), play the right parties (FADER and SXSW), and find the right producer (The Secret Machines’ Benjamin Curtis), all in rapid succession. Most importantly, “Lakeside,” is the sound of now. Some may hear elements of trippy experimentalists like Panda Bear and Animal Collective. Others may hear the sound of NYC’s diverse and danceable TV On the Radio. Yet, as “Lakeside” transitions away from spaced out bliss, to pure, elemental excitement, with accents on the off-beats, whistles, and clicks, then finishes with a furious, fuzz blues guitar jam, you realize you’re listening to band where comparisons hardly matter.

Secretly Canadian will be re-issuing BLK JKS’ Mystery EP this March on CD and 12″ vinyl. For a limited time (through Jan 5th) you can download the ep legally and free from eMusic and Other Music.