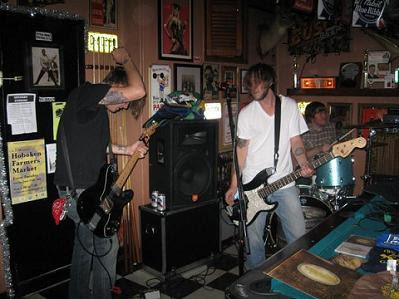 More of the same isn’t always a bad thing, especially when more is a new Two Cow Garage album, and the same is gritty, classic rock inspired riffage paired with solid songwriting done in the every man American tradition of Springsteen and Mellencamp. On “Brass Ring,” the boys bring in a big riff, one that wouldn’t sound out of place on 80’s MTV, had it been coupled with flare, fire, and tight pants. Yet, instead of coming off as cheesy, it sounds ballsy and powerful. Partly, this is due to Micah Schnabel’s abrasive vocals, which are worn out like an old pair of sneakers, or some tattered blue jeans. Just as important, Two Cow Garage have this way of taking those classic influences, and making them seen natural. This isn’t a band brandishing Springsteen because the press says the Arcade Fire worships the Bruce, no, this is a band of regular Midwestern folk who grew up on classic rock, and know of no other way to rock.