A Thursday Rock Block with The Black Lips, Japandroids, WAVVES, and Young Lords 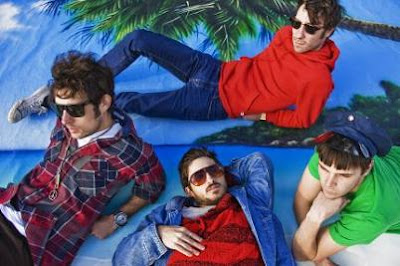 My first thought, as the first guitar chords from the Black Lips “Starting Over” hit my ears: “Wow, listen to how clean they got that guitar to sound. These garage punks are all grown up on their grown up record, with the not so grown up name, 200 Million Thousand.” Then, they started singing, well not singing as much as shouting like their microphones died in a large concert hall and they had to get their voices heard above the constant chitter chatter. All of a sudden, that jangly rhythm from the guitar didn’t sound as clean, and the Black Lips didn’t sound so grown up, and I thought to myself, “Now, this is how the Black Lips should sound at this point in their career — a little cleaner, maybe, just a little maybe more mature, but still capable of rousing up a bit of trouble.”

MP3: The Black Lips – Starting Over

The Vancouver rock duo, Japandroids, aren’t one of those blues rock duos like The Black Keys and the White Stripes, and they really don’t fit the mold of a noise rock duo like No Age, either. Aesthetically, there’s enough fuzz in the mix to make things interesting, but unlike No Age, there isn’t so much background noise buzzing about that it obscures their jams — prime mid-Nineties indie rock with much emphasis on the rock half of the equation.

WAVVES, on the other hand, have no problem laying on the white noise. There’s a melody here, a sweet, sunny melody, but in order to find it, you’ll have to lead your ears through a mix whcih hits red, and sticks at red.

I’m often asked, Bill, what do you do when you’re not rocking Cleveland. Well, if it’s Saturday or Sunday morning, I’m watching English Premier League Soccer on Fox Soccer Channel. It really is turning out to be a good title race this year. Three of the Big Four of English football are at the top of the table (Man U, Chelsea, and Liverpool), with Aston Villa (owned by Cleveland Browns owner Randy Lerner) still holding on to strong title aspirations as well.

Now, since I watch so much football on FSC, I’m also pretty familiar with the commercials that run between matches, especially since FSC has this habit of running the same damn commercials between every match every f’n week. I can tell you all about the Perfect Push Up and the Perfect Pull Up, and f you want perfect skin, you should use Proactiv. I’ve seen so many FreeCreditReport.com commercials, I’m starting to really like the Free Credit Report Band (Seriously, dudes, ditch the jobs at the Medieval fair and tour already).

Lately, FSC has been running this commercial for Guiness, with an old style garage rock jam. Finally a product I can get behind, with a song which doesn’t mention the words “Free,” “Credit,” or “Report.” At first, I thought this nugget had to be a long, lost gem unearthed by the brew masters at Guiness. I was wrong. “Rodeo Songs,” is a new jam laid down by the shaggy, NYC band, Young Lords. Notice how the chorus, “Gotta get home tonight,” works quite well with the Guiness slogan, “Guiness: Drink Responsibly.” And notice how Young Lords do old Stones much better than the old Rolling Stones do old Stones.