An IRC Internet Premiere: “Wolves at a Wedding” and “Held in Light” by Unsparing Sea 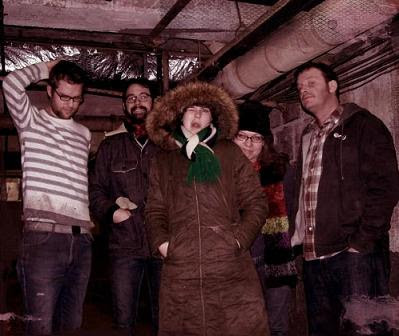 Unsparing Sea’s debut cd, A Cloud in the Cathedral, a masterful suite of nautical inspired folk birthed on the shores of Lake Erie, and carried by the unique voice of Cleveland via Nashville resident, JR Bennett, was one of those releases which caught a lot of people off guard. It certainly surpirsed me, as its tales of grief, loss, and resilience immediately wedged itself in heavy rotation on the old sound system. Similary, its resonance was a surprise to local record store, Music Saves, as suddenly people were coming in and asking for the debut cd by a band who were relatively unknowns, even by Cleveland scene standards.

These new tracks, “Wolves at a Wedding,” and “Held in Light,” which is premiering on I Rock Cleveland today, were recorded with Tim Gerak of Six Parts Seven, and like his work with that band, each track is layered with delicate intricacies, and the recordings are crisp, with each instrument distinctly occupying its own space while simultaneously working as part of the larger composition. Then there’s Tara Klein’s somber cello, adding both weight and depth to the mix, and saw, yes, as in the thing used to take down trees, which when used as a musical instrument is the spookiest thing next to a theremin. Taken together, “Wolves at a Wedding” and “Held in Light,” represent the work of a band poised to start surprising more than just the local Clevelanders.

Unsparing Sea will be releasing the EP, In the Crystal Canyons, next month on cd, 7″, and digitally, with the full length, In the Diamond Caverns, to follow this summer. Also, the band will be opening for Wussy when they play the Beachland Tavern on Saturday, March 14th.