Warning: "continue" targeting switch is equivalent to "break". Did you mean to use "continue 2"? in /nfs/c06/h01/mnt/88637/domains/blog.irockcleveland.com/html/wp-includes/pomo/plural-forms.php on line 210
 I Rock Cleveland I Rock Cleveland | Dos a Cero 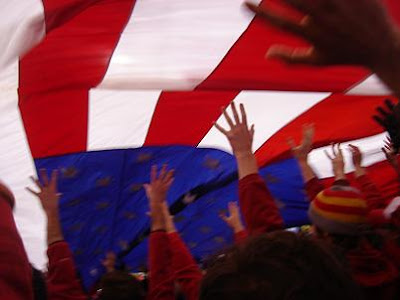 There’s nothing like a good soccer match between the US and Mexico to get the old patriotism flowing. It’s even better when that match is a World Cup Qualifier for the 2010 World Cup, and the result is another 2-0 victory in Columbus for the boys in red, white, and blue.

The weather could best be described as biblical. There was the pre game, hurricane force rain storm that left me with wet pants. Later, I would quip to an attractive young woman, my pants haven’t been this wet since I was three. After the game, came the wind. It had to be blowing 50, 60, 70 MPH, maybe faster.

The game itself, another one I’ll never forget: Two goals for the good guys, a packed Columbus Crew Stadium standing for the entire 90 minutes, and plenty of chanting and singing (Some of which probably shouldn’t be repeated). Someone, it could have been me, thought it a good idea to try to start up a chorus of Genesis’ “Illegal Alien,” as they were walking past a group of Mexican fans. That person should have gotten their a** kicked for that one.