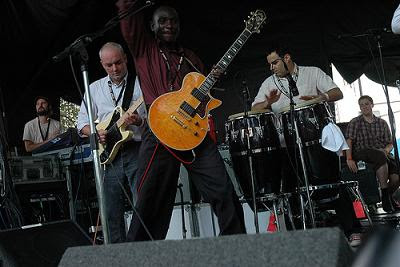 With one of the most infectious, inviting, and genuinely happy live shows around, the half Kenyan, half American band, Extra Golden can make even the most jaded scenester drop their cool in favor of gettin’ down. They certainly had that effect on me when I saw them last summer as part of the 2008 Pitchfork Music Festival.

“Anyango,” the first song to emerge from their third full length, Thank You Very Quickly, is rhythmic, funky, and has one smokin’ hot, Southern guitar lick, cutting in and out of the mix, like someone mashed the Allman Brothers into an unsuspecting, but oh so willing, cut off an obscure world music compilation. Globalization never sounded so good.

Thank You Very Quickly will be out March 10th on Thrill Jockey Records, and the band will be in Cleveland on April 25th for a show at the Beachland Ballroom. Trust me, it’ll be a show you won’t want to miss.