“Youth Against the Empire” by King of Conspiracy 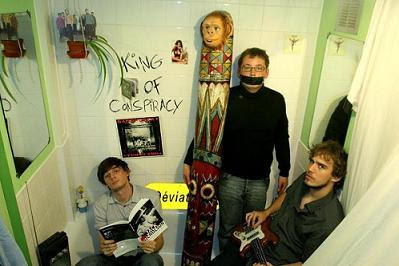 Do my ears deceive me, or did King of Conspiracy nick the intro for “Youth Against Empire” from an Intel commercial? And that drum beat, it sounds positively Rapturous, as if it was nicked from The Rapture. Regardless, once this one kicks in at about the ten second mark, such trivialities become, well, trivial. A rush of hi-hat and snare, and a pointed, and positively electric guitar riff, clearly signal their intention to channel all that youthful fury into three minutes of dance rock destruction. “Youth Against Empire” is unrelenting. It’s Franz Ferdinand on a bender. It’s the song you’ve always wanted to follow “House of Jealous Lovers,” if only The Rapture would take the rock half of dance rock more seriously. And most importantly, it’s unequivocal in its declaration: King of Conspiracy have arrived, hide your women and hide your booze, ’cause you just may have to duck an elbow or two on the dance floor.

MP3: King of Conspiracy – Youth Against the Empire