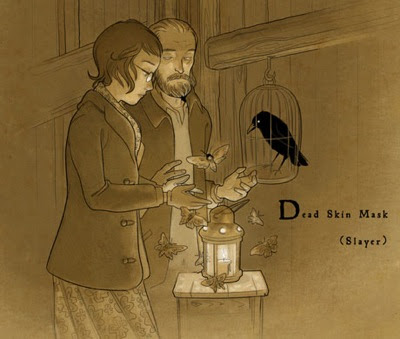 The covers album, much like the greatest hits collection, is usually reserved for the contractual obligation stage of a band’s career. Not so with Nadja’s When I See the Sun Always Shines on TV, if anything, this set of covers by the Canadian doom and drone duo of Aidan Baker and Leah Buckareff, signals a slight, but important shift. By taking on on a song like Slayer’s shredding “Dead Skin Mask,” and cutting the tempo to glacier speed, Nadja are all but forced to move their sound in a more melodic, more dynamic direction. Thereby, they alleviate the number one criticism I have of most artists which can be shoehorned into the ambient drone/shoegazer metal category — that is it sounds impressive, but nothing happens. Now, this isn’t the same as saying they’ve abandoned the overwhelming crush of their previous efforts. Rather, that slow, massive, all-encompassing grind now has key changes, and direction, and structure.

Nadja’s forthcoming covers album, When I See the Sun Always Shines on TV, will be out April 28th on The End Records. In addition to Slayer, the Canadian duo also cover My Bloody Valentine, Codeine, Swans, a-Ha, Elliott Smith, Kids in the Hall, and The Cure.