Warning: "continue" targeting switch is equivalent to "break". Did you mean to use "continue 2"? in /nfs/c06/h01/mnt/88637/domains/blog.irockcleveland.com/html/wp-includes/pomo/plural-forms.php on line 210
 I Rock Cleveland I Rock Cleveland | Top Jam of the Week: “The Lie/The Truth” by Double Dagger

Top Jam of the Week: “The Lie/The Truth” by Double Dagger 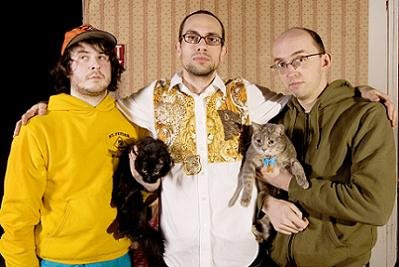 When you listen to “The Lie/The Truth” by the Baltimore trio Double Dagger, you may be forced to do a double take. Is this the long rumored 14th song, the one meant to be included on Fugazi’s landmark collection 13 songs? Vocalist Nolen Strals certainly has fairly good grip on the Ian McKaye preach/scream/preach vocal style, and drummer Denny Brown, while no Brendan Canty, is no slouch behind the kit, either. Still, something is missing. There’s no guitar.

Yet, for Double Dagger the absence of Rock ‘N’ Roll’s signature instrument by no means limits their sound. They are capable of making a ruckus comparable to bands twice their size. For in the hands of Bruce Willen, the bass guitar isn’t a rhythm instrument designated for an out of the way corner of the stage, but the lead, a shredding, ragged, and thumping lead, set to amp toppling volumes, and sent through an array of filters and effects pedals. Not convinced? Just wait for that chorus to kick in, when Willen switches his bass from warble to rumble, and Strals, no longer content to merely point out the fallacy of living in a world where everything is broken down between right and wrong, black and white, feels the need to shout the point home, “There’s a lie and there’s the truth/And something in between is me and you.”

More by Double Dagger will be out May 5th on Thrill Jockey Records. You can catch Double Dagger live in Cleveland on July 11th at Now That’s Class.