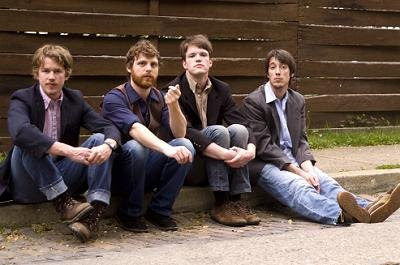 Southeast Engine’s “Black Gold” is not a Soul Asylum cover, although, had they actually recorded a cover of the Minneapolis alt-rock band’s 1992 single, you wouldn’t be hearing any complaints from this corner of the internet. Rather, this “Black Gold,” is a cut off of From the Forest to the Sea, the Athens, Ohio band’s ambitious and engaging, new album out now on Misra Records. At times playing like a poor man’s Wilco, or an Appalachian Conor Oberst, on “Black Gold,” Southeast Engine do such a complete job of hiding their environmental agenda, that one can easily imagine the “Drill, baby drill” crowd embracing this song in the same way the ultra-patriotic sect embraced Springsteen’s “Born in the USA.” “I take a freeway in the morning/I take a freeway to get home,” is a sentiment as American as mom, god, and apple pie. It’s only when you peel back the guitars, and put yourself back in the reality of 2009 (Global warming, Middle Eastern politics, gas guzzlers and the collapse of the American auto market, etc, etc) that you realize coal mines, black smoke, and oil rigs rising out of the ocean aren’t quite the symbols of American economic power that they used to be.

Southeast Engine will be in town for a show at the Beachland Tavern on Thursday, April 9th with the Dreadful Yawns and The Lighthouse and The Whaler opening.