“Arming Eritrea” by Future of the Left 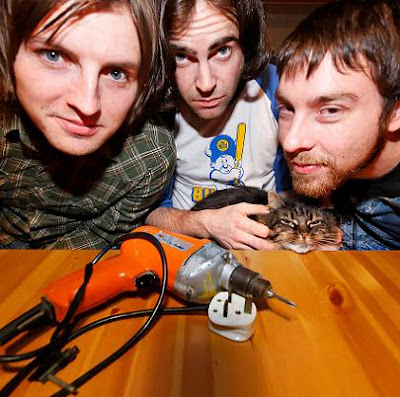 Subtlety isn’t a word normally associated with an Andrew Falkous led band. First with McLusky and now with his current band, Future of the Left, Falkous has always been one to invite confrontation, rather than avoid it, and his music often had just as much bite to it as his incisive lyrics. Sharp? Yes. Instinctive? Yes. Spiteful? Oh god, yes. Subtle? As long as you consider waving with the left hand before coming across with a right hook to the brain a subtle move, then, yes, subtle.

And so, Future of the Left begin, “Arming Eritrea,” the lead track from their forthcoming album, Travels with Myself and Another, with what has to be called a subtle and subdued intro, one almost jazz-like in its execution. It’s the fluttering left hand distracting you from the inevitable, crushing right. It’s 20 seconds to get ready for impact. And then it hits — a metallic riff, rigid and succinct, like the lead from Helmet’s ’91 single “Unsung.” Then, Falkous opens his mouth, and wouldn’t you know it, he’s pissed at someone. All that care put into the intro, and now it’s been bulldozed by Falkous’ insistent cries, “I’m an adult!” and more cathartic, crashing guitars. Subtlety, be damned, this is Future of the Left at their loud, biting, and belligerent best.

Travels with Myself and Another The second album by Future of the Left, will be out June 23rd on 4AD/Beggars.

Future of the Left
4AD/Beggars Group