The Rockometer: When I See the Sun Always Shines on TV by Nadja 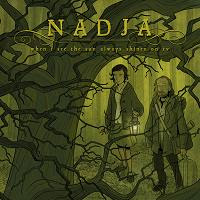 Like swimming in a sea of red cough syrup, Nadja’s all-encompassing guitar rumble is woozy and ethereal, and moves as if time itself has been distorted. Crawling, sprawling dirges seep slowly through the speakers, shaking anything not secured by mega putty. Yet, as impressive as the Nadja listening experience may be, one thing has been missing from their career to date — songs. Twenty minute experiments in ambient doom metal only appeal to a select few, but take that same formula of creeping tempos and heavy, heavy, and hazy guitars and apply them to other people’s pop songs, and, well, now we’re on to something.

By working within the parameters of more traditional song structures on When I See the Sun Only Shines on TV, a covers album comprised of both obvious and surprising influences, Nadja have succeeded in making their most accessible record to date. While choices like My Bloody Valentine’s “Only Shallow” and Slayer’s “Dead Skin Mask” may fall in the obvious influence category (Shoegaze+Metal=Ambient Doom) it’s on the more surprising selections that Aidan Baker and Leah Buckareff really impress.

A-ha’s other top 40 hit, “The Sun Always Shines on TV,” is stripped of synth pop, screwed and slowed, until it becomes a dark and claustrophobic tale of loneliness. Other-worldly chants and whispers lurk beneath Baker’s monochromatic vocals and wistful keyboards are replaced with crushing, relentless tides of guitar. Elliott Smith’s quiet and reserved folk song, “Needle in the Hay,” gets a similar dose of heftiness, removing all its druggy innocence, instead enveloping the listener within the narrow walls of addiction as those big, bruising guitars push ever closer and closer. Even that fun loving Canadian comedy troupe, Kids in the Hall, get the Nadja treatment, with their mid-Nineties power pop piece, “Long Dark Twenties,” becoming a dark, enthralling epic once the tempo is halved and Baker adds black, cascading waves of static. The transformation that “The Sun Always Shines on TV,” “Needle in the Hay,” and “Long Dark Twenties” all undergo is so complete that nary a trace of light is left when Nadja is done with them, and quite amazingly, something so innocent as a-ha can not only follow Slayer, but also sound equally ominous. 9 out of 10 on The Rockometer

STREAM: Nadja – The Sun Only Shines on TV