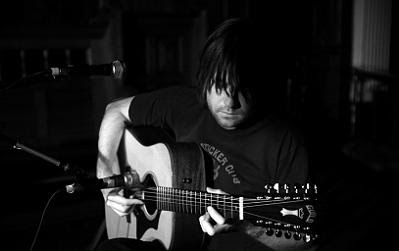 The music of 12-string guitarist James Blackshaw lends itself to lofty adjectives like intricate, stunning, delicate, beautiful, and the over-used amazing. Yet, with a new album, The Glass Bead Game, sharing its title with a Herman Hesse novel of the same name, perhaps its time to unpack a few more adjectives. Hesse’s writing in novels like Siddharta, Steppenwolf, and Demian often dealt with subjects like spirituality, self-discovery, and man’s own responsibility in the modern world. A similar sense inhibits “Cross.” It is meditative, spiritual and probing in tone, as the precise guitar picking of Blackshaw is paired with the angelic vocals of Lavinia Blackwall and a somber string section. With Blackshaw so meticulously weaving his melody out of 12-strings, it practically begs the question, can a man undergo a spiritual awakening in 8-and-a-half minutes? With the amazingly beautiful music of Blackshaw, it just may be possible.

The Glass Bead Game by James Blackshaw will be out next Tuesday, May 26th, on Young God Records.