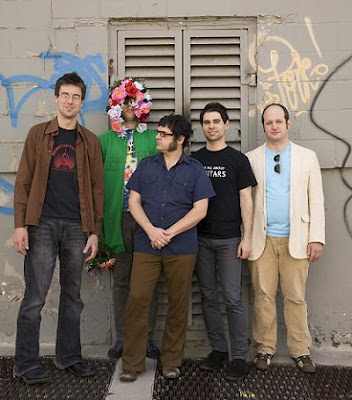 Not to be confused with triskaidekaphobia, the fear of 13, tripadiscaphobia, is the fear of the triple album. While not as common as triskaidekaphobia — many older buildings are missing a 13th floor, my apartment building has no apartmenut number 13 — tripadiscaphobia is a much more reasonable fear. For if a double album allows for massive indulgences of the musical kind, imagine what horrors a band could do if they added a third album to that already set. Think about it, by the time you get to the thrid album, all the good ideas have been used up, all your best guest musicians have already put in their time, and your left with that cute girl at the coffee shop who’s convinced you she rocks the xylophone and your nephew Jimmy, who while he doesn’t exactly rock the recorder, is willing to give it his best shot.

Strangely, I’m not fearing Rated O, the forthcoming triple album by veteran, New York art rockers, Oneida. I’m looking forward to it. Oh, I imagine there may be numbers, or whole sides I’ll want to skip, but I also imagine there will be more numbers like “Saturday” — more dark grooves, more hinted melodies, and more ratcheting blasts of guitar.

Oneida’s massive 3 disc, Rated O, will be out July 7th on Jagjaguwar Records. You can hear more tracks from Rated O at Jagjaguwar’s website.