“Repeat It” by Mystery of Two 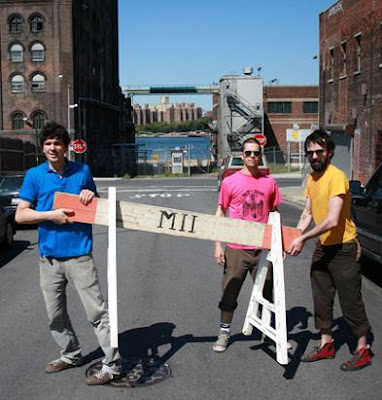 Indebted to Cleveland’s punk/post-punk legacy, but not re-enacting it, Cleveland’s Mystery of Two pull off this delicate task without falling into the same trap as many a modern band — namely, sounding like their record collections. And to far too many modern, post-punk bands, sounding like their record collections means the same old arc of Joy Division, Jesus and Mary Chain, and My Bloody Valentine. For Mystery of Two, Pere Ubu, is an obvious touchstone, on “Repeat It,” if only for Ryan Weitzel’s foreboding and dramatic vocal delivery. His guitar work, on the other hand, alternates between sleek, agile tones, and blasts of fury, amped up post-rock and guitar pedal overload. When paired with a rhythm section featuring the nimble and propulsive work of Nick Riley on drums, the only possible result is to do as the title says, and “Repeat It.”

Mp3: Mystery of Two – Repeat It

July will be quite the busy month for the Cleveland trio. Tomorrow, July 8th, they’ll be opening for Man Man at the Rock N Roll Hall of Fame as part of the Rock Hall’s free summer concert series. Later this week, they’ll be making an appearance at the Ingenuity Festival taking place in downtown Cleveland. Lastly, there’s the matter of their album release party, which will be July 31st at the Beachland Tavern.