What I Did On My Summer Vacation 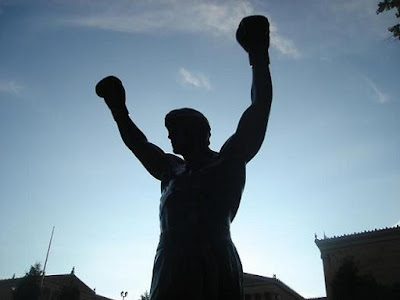 It’s been a while, hasn’t it? In the past week I’ve been stressed and depressed about my state of joblessness, then stopped feeling sorry for myself and took a weekend trip to Philadelphia to visit some very good friends of mine. While in Philadelphia, I saw the famous Rocky statue and climbed the famous Rocky stairs outside the Philadelphia Rocky Art Museum, and I also got a chance to see Jay Reatard with TV Smith of the Adverts at Johnny Brenda’s.

It’s a damn shame TV Smith didn’t have his paperwork in order when the tour was in Cleveland one week prior to the Philly date. He’s still looking spry and rather fit for 53 and he hasn’t lost any of his punk rock ethos. Taking on a Billy Bragg type role of electric troubadour, his solo performance was a poignant attack on The Man and all his hideous forms.

Following TV Smith, Jay Reatard did as Jay Reatard does — In a whir of flapping afros and flying v-guitars, he and his bandmates ripped through tracks from his two singles collections and his one solo album, Blood Visions, in near double time, barely taking any time between songs, and only speaking to the crowd to brusquely announce the next number or to remind overzealous audience members in the front row that he appreciates his personal space.

Then, came the real magic. TV Smith joined Jay Reatard and band on stage for a three song encore which included The Adverts’ “Gary Gilmore’s Eyes” and “We Who Wait,” a track Jay Reatard covered on his Blood Visions album. It was the feel good moment of a feel good weekend where I could forget about all my recession related maladies.

And now that I’m back, and have a refreshed mind and body, we should start seeing regular updates on I Rock Cleveland again. I’ve got a stack of nearly 20 albums in various states of review waiting to be published, and my RSS reader and inbox are both on fire with special goodness this morning. Stay tuned…