Warning: "continue" targeting switch is equivalent to "break". Did you mean to use "continue 2"? in /nfs/c06/h01/mnt/88637/domains/blog.irockcleveland.com/html/wp-includes/pomo/plural-forms.php on line 210
 I Rock Cleveland I Rock Cleveland | 2009 Pitchfork Music Festival Day 2: Fucked Up 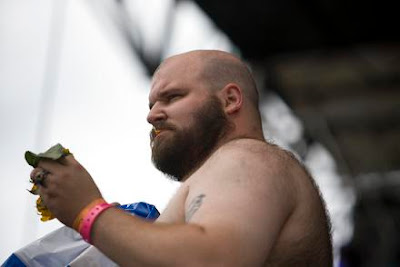 When you hear Fucked Up on record, and especially, Damian Abraham’s shredded voice, you’re bound to make some assumptions about the Toronto progressive, post-hardcore band. For example, you might assume Abraham lives on a diet of smoothies– Glass, thumb tack, sandpaper, and bleach smoothies. Or, perhaps you’ve dug into the lyrics of one of their near 20 minute singles, like, “Year of the Pig,” and came to the conclusion that this is a serious band who sings about serious things like human trafficking and prostitution. And maybe you’ve seen a picture of the generously built Abraham and his bald head and full beard. It’s only natural to assume he’s a born bad-ass. Then Fucked up hits the stage, and you realize all your assumptions are so, so so, so wrong.

Your first clues that you may have some re-thinking to do, came during Fucked Up’s first song, Chemistry of Common Life’s “Son the Father.” Abraham took a sturdy stance on stage, tilted his head back, and pounded a Pepsi. Next, as a series of beach balls made their way onto the stage, Abraham made it his mission to catch and eat each and every one of them. Hardly, the fearsome monster of record, Abraham was more like a hardcore John Candy, intent on engaging the gathering crowd by the Aluminum Stage, both with his band’s music and with his own affable personality.

Throughout Fucked Up’s propulsive, afternoon set, which included “Magic Word,” “No Epiphany,” “Crooked Head,” and “Black Albino Bones,” from Chemistry of Common Life, the b-side, “I Hate Summer,” and Hidden World’s “David Comes to Life,” Fucked Up’s three guitarists shredded powerful chords, the center stage thrashed, and Abraham entertained. Whether he was eating a sunflower, looking for the seeds, pounding alchohol-free drinks, singing amongst the people, letting them play percussion on his generous tummy, or coloring his between song banter with clever quips (“Jesus cries every time someone does a bunch of meth,” and “Do you like sports? I don’t. I like pro-wrestling,” were just two of his better one-liners,) it was impossible to keep your eyes off the gregarious big man. And the fact that Fucked Up pretty much slayed, well, that made their set all the better. No, scratch that. The fact that Fucked Up slayed and Abraham continually entertained made their set the best of Day 2. 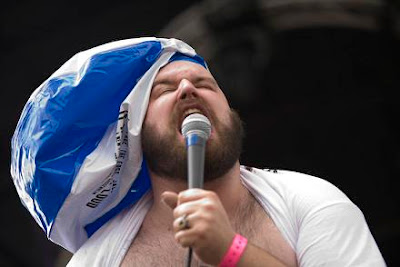 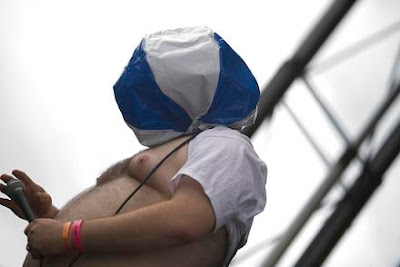 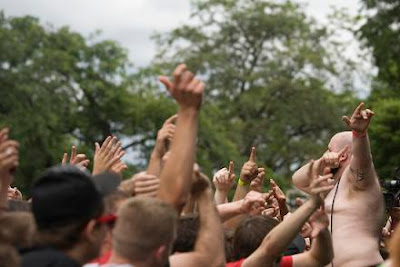 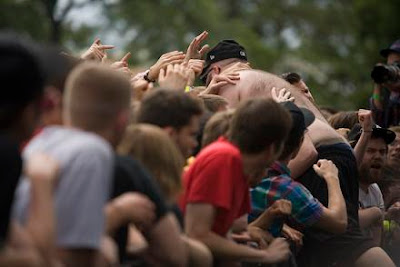 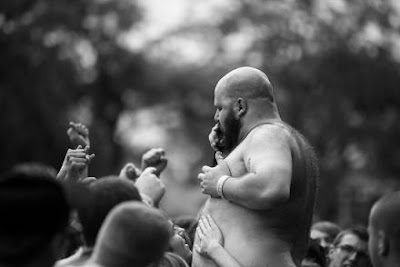 All Photos by Laura Webb

More Photos from Fucked Up at the 2009 Pitchfork Music Festival