Warning: "continue" targeting switch is equivalent to "break". Did you mean to use "continue 2"? in /nfs/c06/h01/mnt/88637/domains/blog.irockcleveland.com/html/wp-includes/pomo/plural-forms.php on line 210
 I Rock Cleveland I Rock Cleveland | 2009 Pitchfork Music Festival Day 2: The Late Afternoon Cynic Takes in Ponytail and Wavves

Considering Fucked Up’s blazing, early afternoon performance on the Aluminum Stage, it shouldn’t be all that surprising that I went through a late afternoon funk. I would spend the late afternoon and early evening, wandering from stage to stage, failing to be impressed.

No one can deny Ponytail’s energy and exuberance. Neon clad front woman, Molly Siegel, must have Five Hour Energy running through her veins, the way she bounces around that stage. Similarly, no one can deny the skill of guitarists Dustin Wong and Ken Seeno, who are teaching a new generation of music fans about guitar geekery with their bright, swift, colorful riffs which incorporate fast finger picking, grungy power chords, jazz, and Satriani. It’s just that there’s only so much Ponytail a man can take — the lack of structure, Siegel’s voice, the way it goes from Japanamation sweetheart to cat in heat with little or no warning, the speed and the unpredictability, the hyper activity of it all. Five songs was enough. 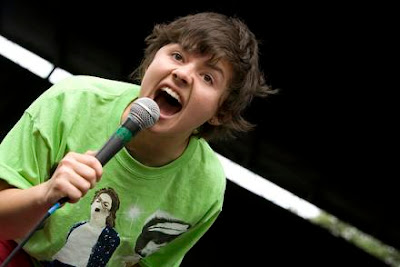 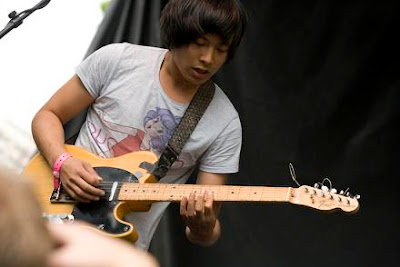 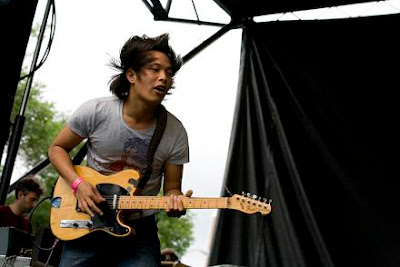 All photos by Laura Webb.

More Photos of Ponytail at the 2009 Pitchfork Music Festival

Of all the bands to be running late on Day 2, it had to be WAVVES, the band with the most on the line. If you’re unfamiliar with the San Diego, lo-fi pop band, here’s a quick history:

Band is unknown.
Band gets rave review from Pitchfork.
Band is no longer unknown and the backlash begins.
Band perseveres through the backlash and hits the festival circuit.
Band breaks down magnificently in Spain in what Pitchfork described as, “The most epic onstage meltdown a band of their small size could conjure.”
More backlash.

Now, he are at the second day of the Pitchfork Music Festival, and there’s a delay. Members of the crowd are assuming the worst. They’re thinking we’re about to see another epic onstage meltdown. Ten, fifteen minutes pass, and the press are escorted away from the stage. Again, this had to be a sign that Williams was about to implode. Finally, Wavves, take the stage, and strikes, one, two, three, awkward chords before aborting the song. You could sense the anticipation building in the crowd. And then, bang! Wavves bursts into the first many home spun pop tunes. No epic melt down. No prima donna bullsh*t. Just those homespun pop tunes coated in loads and loads of re-verb, echo, and distortion.

In the end, Wavves set was neither a fantastic meltdown nor justification of their rapid rise through the independent ranks. Williams has pop songs, and I will never deny a man his pop songs, but he has no stage presence to speak of, and compared to No Age, that other left coast, noise pop duo who had no problem with the ascent from unknowns to indie elite, Wavves is way behind in style, substance, volume, and innovation.