Warning: "continue" targeting switch is equivalent to "break". Did you mean to use "continue 2"? in /nfs/c06/h01/mnt/88637/domains/blog.irockcleveland.com/html/wp-includes/pomo/plural-forms.php on line 210
 I Rock Cleveland I Rock Cleveland | 2009 Pitchfork Music Festival Day 3: The Early Shows — The Mae Shi, Frightened Rabbit, and Blitzen Trapper 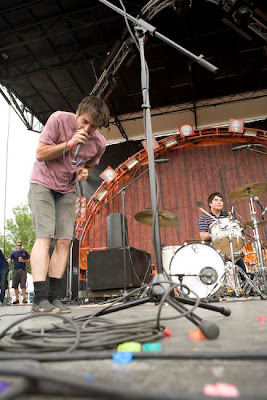 Walking into the final day on the 2009 Music Festival, early arrivers had a chance to see what would perhaps be the final Mae Shi show. Late last week, news broke that three of the four existing members were splitting off and forming a new band, Signals, leaving Jeff Byron to hold on to the Mae Shi name. Yet, if the remaining Mae Shi were operating at only 3/4 efficiency, it certainly didn’t show Sunday afternoon, as they ripped through the glitchy nintendo pop of their 2008 release, HLLYH. Plus, any loss of Byron was more than made up for when the Chicago hip-hop duo, Yea Big and Kid Static, joined them on stage for near the end of the set for “Run to the Facts,” a techy, rock/rap version of “Run to Your Grave,” which first appeared on HLLYEA, Yea Big and Kid Static’s remix of HLLYH. 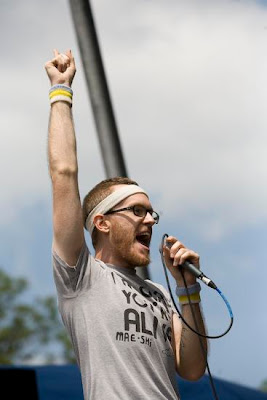 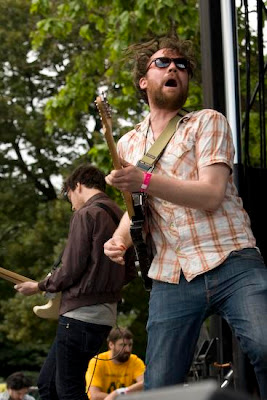 Across the Union Park field, The Scottish band, Frightened Rabbit, kicked off the action on the Connector stage, and from the onset, things didn’t quite click for the emotional, cathartic, and sometimes anthemic pop group. Guitar issues led to an initial delay, but even when everything was plugged in and ready to rock, sound issues remained. A flat, muddled, mix resulted in a sound lacking any definition between bass, guitar, and vocals, and sapped all the power and feeling out of songs like “Old, Old Fashioned,” “The Modern Leper,” and “The Greys.” 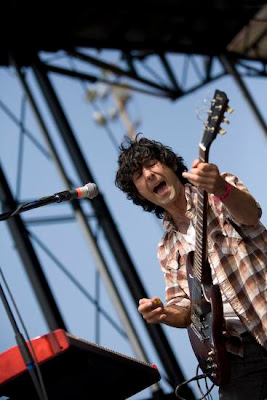 Back to the Aluminum stage, which honestly, with orange scaffolding serving as a backdrop, already looked like the Flaming Lips stage at 2:30 in the afternoon, Blitzen Trapper encountered an early sound problem of their own. The main guitar riff during their opening number, “Wild Mountain Nation,” should have blazed with the force of a classic corvette. It didn’t blaze at all, and instead sounded more like a chevette with holes in its floor boards than a well-oiled, American muscle car.

After some shouts from the crowd (“Turn it up, man!”) and some corrective measures at the sound station, our volume issues were corrected and Blitzen Trapper were back to being the best band doing The Band, who isn’t The Band. Heavy on the Seventies, and a bunch of acts you probably wouldn’t admit to liking (I’m thinking of the Greatful Dead, here) Blitzen Trapper’s set was a throw back to the days where three guitars on stage was one guitar too few. Older fans may be disappointed that the Portland, Oregon act has largely abandoned the experimental, half freak/half folk, nature of their early offerings, but the unadorned guitar chords and harmonica of “Furr,” were as a clear reminder as any that even when they take the freak and squeak out of their folk, they still have some great damn tunes.