Warning: "continue" targeting switch is equivalent to "break". Did you mean to use "continue 2"? in /nfs/c06/h01/mnt/88637/domains/blog.irockcleveland.com/html/wp-includes/pomo/plural-forms.php on line 210
 I Rock Cleveland I Rock Cleveland | 2009 Pitchfork Music Festival Day 3: The Evening Shows — Japandroids, M83, Grizzly Bear, Mew 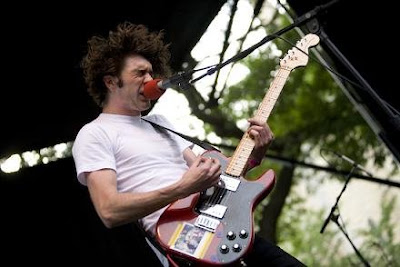 Was it a breeze I couldn’t feel? Was there a fan I couldn’t see? Or, was it the power of Rock ‘N’ Roll? I can’t say for certain whether the wind which kept the hair of Japandroids’ guitarist Brian King in perpetual motion was man-made or natural, but I’d like to think it was the power of Rock ‘N’ Roll. Gracious taking the stage, King and drummer David Prowse, didn’t want to waste time with banter (They assured us it was good banter) and instead wanted to use the limited minutes they had on the Balance Stage rock. And rock they did. An energetic King and his wind swept hair, spent the set climbing gear, head banging in front of his stack of four amps, thrashing, and most importantly, shredding. Taking cues from ’90s guitar heroes like Thurston Moore and J. Mascis, as well as bits and pieces of boogie rock, cock rock, and glam, the Vancouver two piece defended their buzz band status with “The Boys are Leaving Town,” “Rockers East Vancouver,” and “Young Hearts Spark Fire,” a string of throbbing, unapologetic, fists and whiskey, rock.

Much like Saturday evening, my Sunday evening schedule was lacking in the must see department, so I used the time between Japandroids and Flaming Lips to stand in port-a-let lines, rest my legs, and be cynical.

M83: Hello, trance flashbacks. Sure, they managed to get a rather sizable dance party going in front of the Aluminum Stage, but I couldn’t shake the memories of Digweed, Detroit, bad drugs, and a wasted, Indian-American med student pushing 100 along Detroit Freeways at five in the morning.

Grizzly Bear: I really, really wanted to give this band a chance. So many of my peers are ga ga for these guys, but after three songs I realized I didn’t like them when they were known as Spandau Ballet, and I don’t like them today.

Mew: Sometimes like a guitar based Depeche Mode, sometimes like the Swedish band, Dungen. Sometimes funky, sometimes dramatic, and sometimes brash and loud. Yet, at no time did I ever reach any comfort with their music.
All photos by Laura Webb