Warning: "continue" targeting switch is equivalent to "break". Did you mean to use "continue 2"? in /nfs/c06/h01/mnt/88637/domains/blog.irockcleveland.com/html/wp-includes/pomo/plural-forms.php on line 210
 I Rock Cleveland I Rock Cleveland | 2009 Pitchfork Music Festival Day 3: The Flaming Lips 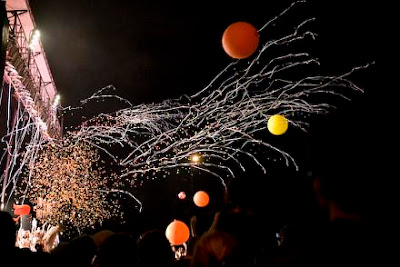 A Flaming Lips concert is quite unlike any concert you’re likely to attend. It’s like a birthday party. Not just for you and your friends, but for everyone. There were 15,000 birthdays yesterday, and giant orange and yellow balloons, and orange and yellow confetti shot into the night sky, and dancing frogs and dancing foxes, and a giant, pulsating vagina through which the band would enter the stage, and best of all there was a modern day Willy Wonka who goes by the name Wayne Coyne, there to make sure that this birthday with the Flaming Lips would be the best birthday you’ve ever had. As if that wasn’t enough, Coyne and his bandmates were so gracious to be playing the Pitchfork Music Festival, repeatedly telling the crowd how much they appreciate their support and again and again saying how the Pitchfork Music Festival is the best festival on the circuit.

Coyne’s graciousness didn’t end with his between song talks. As he unfurled four or five sheets of rippled paper, he explained how tonight, like Friday night, would also be a Write the Set night. Yet, even as he took suggestions from the list, “Bad Days,” “Enthusiasm for Life Defeats Existential Fear,” and “Moutain Side,” being a few of the rarities, Coyne was quick to point out that every Flaming Lips show includes the songs you want to hear. Sunday night, those fan specials included stripped down versions of “Flight Test” and “Yoshimi Battles the Pink Robots,” where Coyne was accompanied by not much more than the stray guitar chord and keyboard, as well as their breakthrough single, “She Don’t Use Jelly.” The bright, warm tones on “Yoshimi,” especially, were just about perfect for the end of the weekend. It was touching, and tender, and it could have made you cry, except the song is about a super woman and her quest to defeat an army of gigantic robots.

“Yoshimi” could have been the highlight of the weekend. I say could have because the tenderness of “Yoshimi” was shortly eclipsed by the pure, undiluted bliss of “Do You Realize.” The fields were filled with the sounds of effervescent keys and grand, processional guitars, the confetti cannons were re-loaded with never-ending strips of yellow and orange, brightening the night sky, and the biggest orange balloon of the night burst with even more confetti. Maybe you lost your job. Maybe you’ve lost your job, your wife, your dog, and your pants. For five minutes nothing else existed, but the moment. And what a beautiful moment it was. 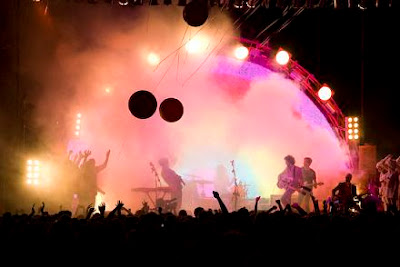 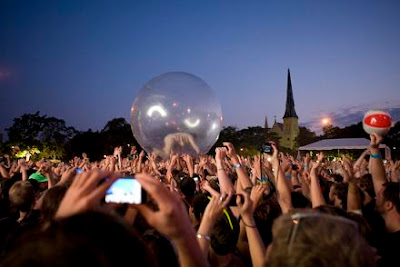 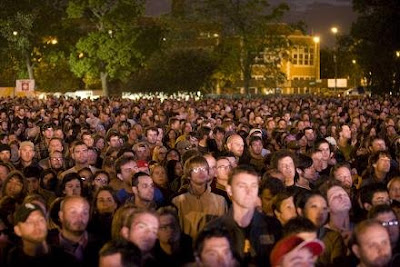