Warning: "continue" targeting switch is equivalent to "break". Did you mean to use "continue 2"? in /nfs/c06/h01/mnt/88637/domains/blog.irockcleveland.com/html/wp-includes/pomo/plural-forms.php on line 210
 I Rock Cleveland I Rock Cleveland | 2009 Pitchfork Music Festival Day 3: The Thermals 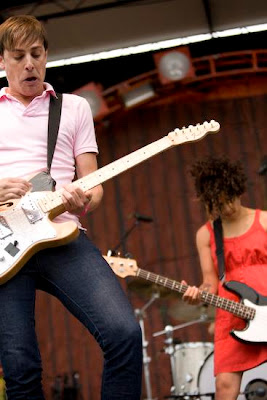 For those of us who witnessed the music and culture of the ’90s firsthand, the unfolding revival of the past decade can be a bit unnerving. At one point Saturday, I sent a text to my photographer, Laura Webb, asking if flannel is back. A quick scan of the crowds Saturday and Sunday revealed the most plaid patterns I’ve seen since the days when Lollapalooza was a tour with Green Day, Pearl Jam, Soundgarden and The Breeders gracing the stage, and not the ginormous festival event it is today.

Our fashion consultant, Laura’s sister Alissa, would later correct us and say that it isn’t merely a flannel comeback, but plaid fad, in general. Still, that won’t stop me from going to the Salvation Army and buying every choice piece of flannel I can find, and it certainly didn’t stop the Portland power pop/punk rock trio, The Thermals from whole-heartedly embracing the days of Doc Martins. Their set featured four covers of classic ’90s cuts — Sonic Youth’s “100%,” Nirvana’s “Verse Chorus Verse,” The Breeders’ “Saints,” and Green Day’s “Basket Case.” And if the ’90s covers were meant to put us old-timers at ease, and help us hop around like it was 1993 (Really, a ’90s revival is ok), then it was The Thermals own, pogo-ready material which got the kids going. Close to the stage you could see the veins popping on the neck of guitarist/vocalist, Hutch Harris, while bassist Kathy Foster was all head banging and all smiles. The effort paid off as a pogo pit, jumped and thrust their hands in the air to “A Pillar of Salt” and “Here’s Your Future.”