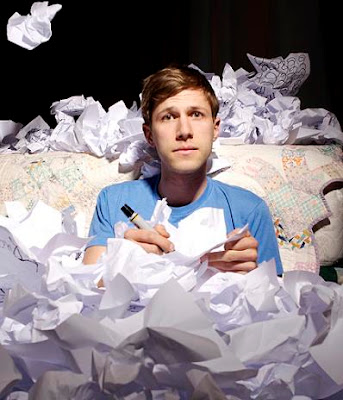 When you consider Brent from Menomena, aka Brent Knopf, aka Ramona Falls, flew into Cleveland last Friday from Portland for the express purpose of playing an acoustic in-store at Music Saves, it becomes awfully difficult to say any disparaging words about the man. However, the tale of how Knopf subjected himself to the rigors of modern travel for a thirty minute show is only half the story. With just one small amp and an acoustic guitar, he showed himself to be a very personable, very genuine performer, with a strong, versatile voice echoing that of Seventies folky Art Garfunkel. It was both a stirring performance and one that very much exceeded its informal nature.

One of the unquestioned highlights of the night was “Russia,” a cold tale of longing framed by a a bleak journey through northern Siberia. As you listen to this track now, as a work by Ramona Falls, a project with which Knopf was aided by a small battalion of guest musicians, and not just Brent from Menomena, its poignancy literally leaps from the speakers, as it evolves from man with guitar to a well structured, mature and modern pop arrangement. Never weighty, or overburdened with too many musicians, Knopf wisely knows when to call on his aides — A sharp blast of keyboard, a staggering drum rhythm, a small string section — all patiently wait for their turn, and all come together brilliantly for a brief and fleeting crescendo.

Intuit by Ramona Falls will be out August 18th on Barsuk Records. Knopf will be back in Cleveland, this time with a four piece band, for a show at the Beachland Tavern on Saturday, September 12th.