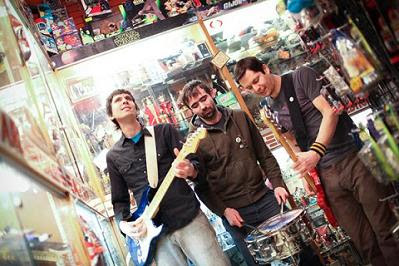 It may not sound like it at first, but “French Rocking Horse,” is perhaps the most obvious pop moment in Mystery of Two’s catalog. Of course, for Mystery of Two, pop is more akin to the avant pop and post-punk of old time Cleveland bands like Pere Ubu, and the sinewy opening riff spun by guitarist/vocalist Ryan Weitzel, certainly doesn’t speak in pop terms, but just wait. Wait for the chorus, when that twisting, slithering lead riff yields to a big blast of fuzzed out power chords. All of a sudden, Weitzel’s voice doesn’t sound so dramatic, and this group of three musicians, known for being some of the more talented, technically proficient players in the scene, show they have a less serious side — One which knows when its time to impress, and one which knows when its time to step aside and let Rock ‘N’ Roll take over.

Mystery of Two’s CD release show for their second, self titled album, is taking place tomorrow night at the Beachland Tavern with Hot Cha Cha and Djs Chris Kulcsar and Tony Merritt.