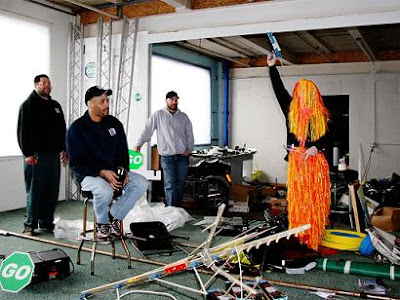 Keelhaul’s Triumphant Return to Obscurity (Yes, that’s the new album title) begins in earnest this Friday night, with the Cleveland heavies unleashing their first full length in six years at the Grog Shop. And lest you think they’re kidding about the album title, the album’s twelve cuts reinforce the band’s contention — Instrumental tracks lacking the drama and grace to fit in with the instru-metal crowd, tempos too swift to be doom, riffs too modern for the ’70s revivalists, not nearly weedy enough for stoner and sludge types — its complex and heavy riffage is comfortably out of touch with many of the trends in today’s heavy music scene. Thus, obscurity has been ensured, and one of the year’s best doses of heavy from Northeast, Ohio has been delivered.

Just how exactly do you capture the image of the three hairy dudes going absolutely apesh*t on record? The answer for the Israeli garage-punk band, Monotonix, is you don’t. You leave the wild, knickers on fire moments for the youtubers and fill your albums with rough, ragged, and blazing riffs.

Monotonix’s latest album, Where Were You When It Happened, is available now through the Drag City Reocrds store. They’ll be in Cleveland on October 5th for a show at Now That’s Class.

Somewhere, there’s an obscure SST band smiling. Somewhere, there’s an old Jesus Lizard fan nodding in appreciation. All to aware to the fact that modern indie has all but forsaken it’s noisy, vicious punk and hardcore roots, Pissed Jeans have taken note, and with with “False Jesii Part 2,” have cranked out an abrasive, and slyly melodic nod to the days of scuzz gone by. Of course, in this context, slyly melodic means just shy of unsettling and mumbling through a chorus like a man in desperate need of meds. And singing along may require shotgunning a 12 pack of Coors Lite to get yourself in key, but it’s melodic, nonetheless.

“Colossus” is indeed, colossal. The first track released from Lightning Bolt’s Earthly Delights, coming out October 13th on Load Records, is seven minutes of low-end fury. A slow, sludgy bass riff befitting any number of Southern Lord’s stable of doom leads the way, but what follows is neither riff repetition nor guitar hero geekery, but Lightning Bolt shredding their own way with an extended freak out session of damaged and deranged pulses of static and rapid-fire drum hits all but obliterating that initial groove.