"I Hate People" by Jemina Pearl (ex-BYOP) with Iggy Pop 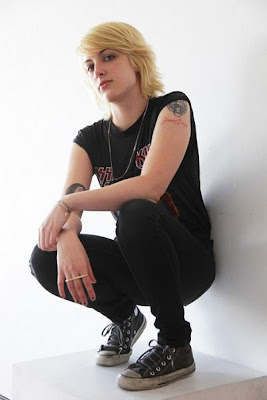 Well, what do you know? The fiery, riot-girl Jemina Pearl, recently departed from that rowdy, band of Nashville garage-punks, Be Your Own Pet, has gone all Go-Go on us. Not that this move should come as a surprise, as The Go-Go’s, themselves had roots in the LA punk scene before they became everyone’s favorite band of water-skiing, fun loving new wave popsters.

With “I Hate People,” the first track to emerge from Pearl’s solo debut, the tempos have been cut, and where once she would have been backed by all guitars blazing, it’s all bouncy, cheerful and bright. And while the opening line, “Another lonely night/Think if I’m lucky I’ll get into a fight/I hate everything I see/It’s a different city with the same old scene,” won’t win Pearl any plaudits from the literary rock crowd, it does make her intentions plainly clear — This riot girl may be doing bubblegum pop, but there’s still plenty of snarl to go around. Plus, when you want some snarl, it never hurts to have the godfather of snarly, garage rock, Iggy Pop, doing harmonies on the chorus, “Oh,I hate people/But, I like you.” That man is instant grit.

Jemina Pearl’s solo debut, Break It Up, will be released October 6th on Ecstatic Peace/Universal. She will be in Cleveland on Tuesday, October 13th, for a show at the Beachland Tavern.