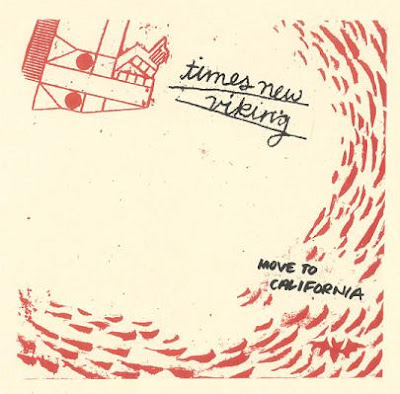 When Times New Viking sing, “Move to California, I hear you’ll have a better time,” between their now trademark ramshackle of hissing, whistling keyboards, distorted guitar, and throbbing, buckling drums, it’s not exactly the type of endorsement that will actually get someone to move to California. If Times New Viking cared about you, they’d say something more along the lines of “Move to California, you’ll never have to experience another Midwest winter and there’s sun, surf, and stars, and taco trucks on every corner serving only the most delicious in portable Mexican cuisine.” Now, that would get me to move to California. Instead, they give a tossed-off sentiment, one which could just as easily have been, “Oh, hell, why don’t you just go to California.” See, there’s a difference. Just as there’s a difference between the lo-fi, Johnny-Come-Latelies and those who have been busting out fractured pop for four albums, as Times New Viking have done.