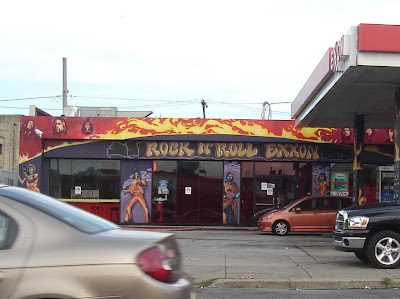 I’ve returned from Philadelphia and I’m back in the land of white socks and sandals. My interview trip was fairly successful — had two terrific interviews and one awkward one, and maybe, just maybe, I’ll get a job out of all of this. I also had a chance to take an afternoon trip to Atlantic City where I lost $7 and saw a Jersey grandma with purple hair, got to take in the United States vs El Salvador World Cup Qualifier with the Sons of Ben, a Philadelphia soccer supporters group, spent a lot of time with some very close friends, and honed my urban bike riding skills through the streets of Center City. At first I was reluctant to do that move where you make a third lane between two lanes of heavy traffic, but one I saw the benefits of the middle lane, I embraced it, snaking my way between heavy trucks, buses and taxis who were sitting at the red light to get to the front of the line. Oh, and I also saw the famous, Philadelphia Rock ‘N’ Roll Exxon. How could I forget Rock ‘N’ Roll Exxon?

As for I Rock Cleveland, it’s gonna take a couple more days before I can get back to regular updates, but I fully expect to be back up and running this coming Monday. Thanks for your patience and understanding and your rocking. We will be rocking soon.