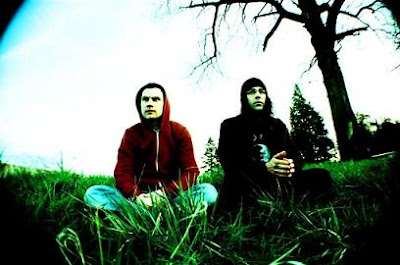 After three albums of heavy, pounding, spiritual ruminations one got the feeling that Om had taken their drum, bass, and Buddhism sound about as far as they could take it. Oh, it was a good sound, with Al Cisneros on vocals and bass and Chris Hakius on drums, throbbing and rumbling their way to Nirvana, but the question remained, how many more fifteen minute chants could they record?

In comes Emil Amos, to replace Hakius on drums, and with Amos also comes an expanded music palate. Amos, of course, is an integral member of another heavy, spiritual band, Grails, an outfit who regularly sample ancient, mystical cultures to supplement their dark musical visions. One could say Cisneros and Amos are a match made in Tibet, or China, or India, Egypt, Ethiopia or Jerusalem. You get the idea.

On “Cremation Ghat II,” the closing track on God is Good, their soon to be released fourth album, the newly expanded sound of Om is on full display — still minimal, and still driven by drum and bass, but now adorned with sitars and other strings. Think of it as the midpoint between Grails two 2008 releases, Doomsdayer’s Holiday and Take Refuge in Clean Living, and Om’s 2007 release, Pilgrimage. And for those of you who worry you’ll miss the 15 minute meditations of the old Om, don’t fret. There’s always side one, track one — “Thebes.”

Om’s fourth full length, God Is Good, is due out September 29th on Drag City.