"Ticket Away From Prague" by Hot Cha Cha 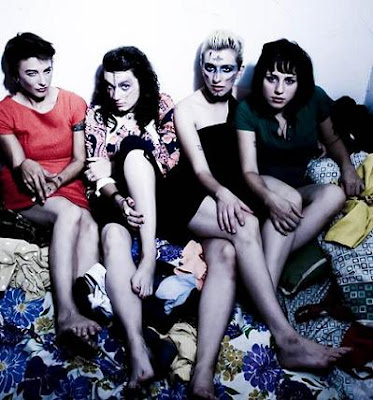 Early in their career, the Cleveland new wave/post-punk band Hot Cha Cha had a reputation, right or wrong, of being a vehicle for Jovana Batkovic’s stage antics, first, and a band, second. Betkovic’s brightly colored leotards and her extroverted personality were the story.

One local blogger, one who shall go nameless at this moment, bought in wholly and wrote, “Hot Cha Cha are the best live act in town.” It was a sentiment which didn’t go over so well without the follow up comment, “In terms of entertainment,” clarifying his initial posting.

Now, on the eve of the release of their first full length, there’s a second story emerging — These gals can really play.

Exhibit A: “Ticket Away From Prague,” a track where the low end has a definite fuzz bass feel, one not gathered from fuzzy bass, per se, but from its combination with Mandy Aramouni’s vintage keys. Bosnian born Betkovic adds sophistication with her best Eastern European Debbie Harry act. The deal for post-punk dominance, however, isn’t sealed, until Aramouni trades the keyboards for guitar and produces a sound which is clean, clear, seductive, and sly, alternating between deliberate, elongated notes and rapidly picked ones.

Given this track, had I never seen Bektovic in her best yellow leotard, coaxing the Beachland’s Mark Leddy to dance with her on the Tavern stage, I’d still feel confident in saying this band has it — Looks, attitude, and now, the music.

Hot Cha Cha’s first full length album, The Worlds Hardest Working Telescope & The Violent Birth of Stars, will be out on Cleveland’s own, Exit Stencil Records, on October 27th. The CD release show is scheduled for Friday, October 16th at the Grog Shop with Freedom, Founding Fathers and Uno Lady.