Warning: "continue" targeting switch is equivalent to "break". Did you mean to use "continue 2"? in /nfs/c06/h01/mnt/88637/domains/blog.irockcleveland.com/html/wp-includes/pomo/plural-forms.php on line 210
 I Rock Cleveland I Rock Cleveland | The Rockometer: The Flaming Lips’ Embryonic

The Rockometer: The Flaming Lips’ Embryonic 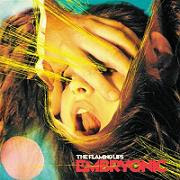 The Flaming Lips’ Embryonic is endearingly weird album. Alien sounds can be found in the fore of the mix, in the rear, and in every section in between. And when the Lips aren’t processing the familiarity straight out of their instruments, they have Karen O, the Yeah Yeah Yeahs lead singer, screeching like a beast unleashed on her backing vocals.

Embryonic is a long album. Its 18 tracks and 70+ minutes would be considered lengthy in any era, but especially today, where the album’s death is routinely proclaimed, the iTunes single is the supposed king, and a vinyl resurgence has aided in limiting run times to the 40 minute mark.

Embryonic is an album which can be frustratingly rough on your stereo speakers. Abnormally high recording levels produce forceful distortion, the likes of which no amount of knob twisting can alleviate. Big, bulbous bursts of synth, tortured and twisted bass lines, and fractured bits of guitar all take turns pushing recording norms and challenging standards of what a “good” album should sound like.

However, once you get past the eccentricity and the volume and the harshness, and you give up lowering bass, raising treble, positioning and repositioning speakers, and you finally find 70 minutes to sit down and let it all sink in, you’ll find Embryonic to be an awesome record, awesome in the truest sense of the Oxford English Dictionary definition of the word.

Highlights abound in the form of tech-y, astro-lounge grooves (“Convinced of the Hex” and “The Sparrow Looks Up at the Mountain”), ominous movements of robot rock gone horribly wrong (“See the Leaves,” “Powerless,” and “Worm Mountain”), and fragile, startlingly beautiful, atomospheric pieces (“Evil, “If,” and “Gemini Syringes”). Yet, the tour de force doesn’t arrive to the very end, when “Watching the Planets” encapsulates an album’s worth of rigidity, beauty, subtlety, and oddity in one five minute shot of acid rock madness, providing a fitting end to an album which succeeds and exceeds The Flaming Lips previously high standards of strange first set on 1999’s The Soft Bulletin and 2002’s Yoshimi Battles the Pink Robots. 10 out of 10 on the Rockometer

YOUTUBE: The Flaming Lips – I Can be a Frog