From the IRCWHQ Newsdesk: Dinosaur, Jr’s J. Mascis and Members of Cobra Verde Team Up for Sweet Apple 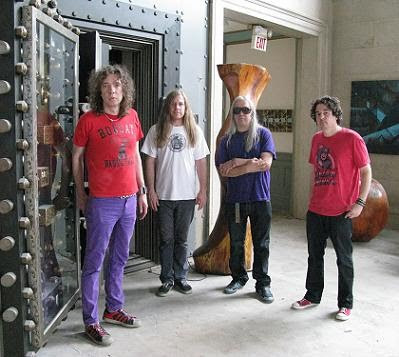 As the story goes, Cobra Verde’s 2008 release, Haven’t Slept a Year, took its title from the period during which Cobra Verde’s lead singer, John Petkovic, suffered through insomnia while dealing with a dying mother. And as the story continues, that Cobra Verde album wasn’t the only work which came to fruitiion during that difficult time in Petkovic’s life. After his mother’s death, Petkovic headed east, to New England, and met up with Dinosaur Jr’s J Mascis and Witch’s Dave Sweetapple. While the purpose of the trip wasn’t to write and then record a new album, that’s exactly what happened when Petkovic (guitar/vocals), Sweetapple (bass), Mascis (drums/guitars/vocals), and Cobra Verde’s Tim Parnin (guitar) got together. The fruits of their friendship would be Sweet Apple. The press release from Tee Pee Records, who will be releasing Sweet Apple’s Love and Desperation on March 30th, promises driving rock, power-pop and even a ballad or two, but with a label like Tee Pee, you can all but guarantee there will be some heavy.