The Rockometer: Contra by Vampire Weekend 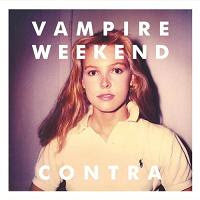 Like Peter, Bjorn and John’s 2009 release, Living Things, Vampire Weekend’s Contra is a much anticipated follow-up to a breakthrough album which ambitiously attempts to stretch the very definition of the band through incorporating varied song structures and increased electronic elements. And like Living Things (An album I first reviewed quite positively), Contra, too, suffers a similar fate — appealing more to the critical ear while forsaking the “stickiness” which made their prior effort so enjoyable, fading in appeal once you get past its initial sheen.

For Vampire Weekend, things start off promising enough on Contra. Lead track “Horchata,” could have well been a left-over from the sessions which produced their debut. It shares the same sensibilities — complex, but not overwhelming in its execution. It’s a classic pop song augmented with well mannered strings, tasteful bits of xylophone and the occasional rhythmic flourish. While “Holiday” and “Cousins” both upbeat and bouncy, hearken back to the second wave of British ska music.

Your first sing that something isn’t quite right here comes on “California English.” Ezra Koenig’s voice is needlessly auto-tuned and the instrumentation sounds as if it was heavily processed, too. It’s as if a computer program spit out its own interpretation of what a Vampire Weekend song should be. Tones which sounded warm, now sound stiff and digital.

This troubling trend continues throughout the second half of the album. Instead of a horn section, there’s a reasonable computer facsimile of what real horns sound like. Guitars, drums and voice all go through heavy processing rendering their original tones nothing more than scattered memories. After a while, you begin yearning for a guitar that’s just a guitar — Not a chopped guitar tone, not a spliced guitar tone — just a guitar. The logical end of all this technological tinkering comes on “Diplomat’s Son,” where an M.I.A.- lite beat is backed by vocals which sound as if they’re performed by an M.I.A.-bot.

Whether Vampire Weekend got to this point through an endless pursuit of perfection or through a desire to expand their world-pop sound is a moot point. The immediacy and innocence of its predecessor is gone and a glaring fact remains — A little less technology would have gone a long way in making Contra a viable record. 5 out of 10 on The Rockometer.