The Rockometer: Turning On by Cloud Nothings 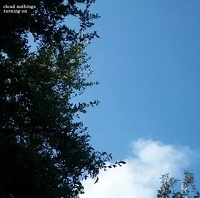 Just as I thought one, not quite ready for prime-time Californian with poor spelling and improper capitalization had gone out and ruined lo-fi rock for good, in comes this young Clevelander, Dylan Baldi, recording as Cloud Nothings with his one microphone and his nine irresistible pop songs, and, all of a sudden, lo-fi doesn’t seem quite so dead.  Rather, it seems as vibrant as that day when Robert Pollard first brought together his band and 100 bottles of beer in his Dayton, Ohio garage.

Lead track “Can’t Stay Awake,” is a two-minute hit of skittish, post-Strokes garage rock.  “Old Street,” meanwhile, instantly recalls the simple, British invasion revivalism of modern bands like The Box Elders.  “You Are Opening” uses a similar aesthetic, and merges it with a rigid post-punk guitar rhythm.   On the flip-side, songs like the tender, Brit-pop ballad, “Water Turns Back,” and the Sonic Youth inspired, “Real Thing,” only reinforce what you gathered from the front-side — Baldi’s ability to kick out bedroom jams is limitless.

Yet, if there’s one thing holding this band back, it’s the same thing which makes Turning On, so instantly likable: Namely, that lo-fi sound from Baldi’s one microphone, old-school studio.  There are times when a bass-line or guitar riff will come in way too hot or surprisingly clean.  Other times, this lack of a proper studio ends up masking exactly how much time and detail went into these recordings.  Layers of guitars tend to bleed together into one shapeless fuzz.

Is this bit of criticism being too picky?  Maybe, and maybe not.  Just imagine for a minute, what the Cloud Nothings would be capable of if they had a second microphone.  Imagine, for a minute, how amazing these recordings would sound if Baldi had two days in a studio.  Pardon the obvious pun, but the sky would be the limit.   7 out of 10 on The Rockometer.

Cloud Nothings debut record Turning On will be available on Speakertree Records on Feb. 23rd, but if you’re in Cleveland, you can pick up this locally recorded and locally pressed record (Yes, it was manufactured at our very own Gotta Groove Records) at Music Saves.