The Rockometer: Have One on Me by Joanna Newsom 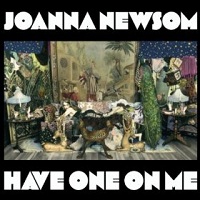 Joanna Newsom
Have One on Me
Drag City

It was a very wise woman who first told me, “If you don’t have something nice to say, then don’t say it at all.”  And so I approach Joanna Newsom’s latest, the two-hour, four-minute Have One On Me, with those very words in mind.  I could describe Newsom’s sprite-like voice as Bjork meets Miss Piggy.  I could accuse my fellow critics of being under the spell of the pixie and her golden harp for six years running.  I could describe her wandering narratives as meandering, lost, or misguided.  I could describe things I’d rather be listening to at the moment, like a chorus of air horns doing Beethoven’s greatest symphonies, Alvin and the Chipmunks as the Ramones, or Stray Cats in Heat singing the world’s greatest love songs.  I could do these things, but I won’t.  The words of that very wise woman, my very own mother, prevent me from doing so.  Instead, I’ll warn you that the music of Joanna Newsom is regularly described with terms like abstract, challenging, and adventurous and these adjectives are often used in conjunction with the declaration that Have One on Me is her most accessible work to date.  I will warn you that Newsom’s most ardent supporters freely admit that her music isn’t for everyone.  I will warn you that critical consensus does not always equate to a pleasant sounding record, and I’ll leave it at that.  Thank you, mom, for a life’s lesson well taught.     _ out of 10 on The Rockometer.

Love her, hate her, or playfully make fun of her fuggly voice, Joanna Newsom’s Have One on Me is now streaming in its entirety at NPR.org.