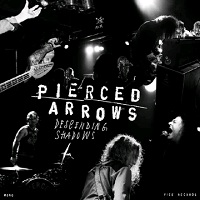 Lead track, “This is the Day,” has so much punk rock energy and so much snarl you’d swear they were feisty newcomers to the Rock and Roll scene and not a pair who’s been kicking out jams for more than 30 years. “On Our Way,” meanwhile, may be the best hard-charging, AC/DC rock song not written and performed by AC/DC.

Yet, as striking as Pierced Arrows are when they’re bashing out aggression on guitar, bass, and drums, (Also see “Paranoia” and “Zip My Lip”), they’re even more compelling when their age does show. As Toddy strains for the high notes on the mid-temp rocker, “Ain’t Life Strange,” there’s an added sense of credibility to her statement. It’s one thing for a young ‘un to tell you life is f*cked up, but this is someone who’s spent years and years of her life in half-lit bars and ragged old vans, living the life of a traveling musician.  Similarly, when the refrain from “Let it Rain,” blares in tandem, “Let it rain/Let it rain/And wash away the pain,” there’s the feeling that they’re talking about more than growing pains.  Rather, they’re referring to the type of pain, be it physical or mental, that tears at your very being.

Later, Toddy has the lead again on “This Time Around,” a tender, but fractured ballad. Her voice is filled with crackles and creaks.  Fred’s guitar shows strain with every pluck of the string.  It’s as poignant as any love song you’re likely to hear this year, again, revealing  the strength of this set: Be it living, loving, or rocking the F out, Descending Shadows repeatedly battles the notion of our world being a young man’s world, sometimes showing itself to be a little worse for the wear, but more times than not, proving all the kids wrong.   8 out of 10 on The Rockometer.

Pierced Arrows will be in town this Saturday, February 27th for a show at the Beachland Tavern.