Warning: "continue" targeting switch is equivalent to "break". Did you mean to use "continue 2"? in /nfs/c06/h01/mnt/88637/domains/blog.irockcleveland.com/html/wp-includes/pomo/plural-forms.php on line 210
 I Rock Cleveland I Rock Cleveland | The Rockometer: Rough Frame by The Art Museums

The Rockometer: Rough Frame by The Art Museums 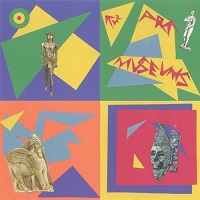 The songs on The Art Museums’ Rough Frame are simple and well-structured and are reminiscent of that era of British pop before Brit-Pop became a buzz-word.  The The vocals are light and airy and covered with the type echo which make them sound as if they were recorded in a big, empty cathedral.  The overriding aesthetic is that of modern, lo-fi pop — gritty in the places you’d expect it to be gritty and soft in the places you’d expect it to be soft.  And it would all make for a wonderful pop album, except more times than not, the rhythm section consists of one poorly-programmed, ill-fitting drum machine capable of only the most rudimentary beats.   It’s as if the entire album was done and ready for mastering and someone realized there were no drums on any of the tracks.  Then, instead of saying “You know what?  This sounds pretty good without drums,” they panicked and said, “Oh, sh*t, we forgot the drums.  Quick, someone get me a drum machine!”  And at that point, the album took a nasty turn.   Really, how hard is it to call a friend with a drum kit, or to find someone who knows how to use a drum machine, or to get someone who can clap and count in four-four time?  If anything was done to give these songs more backbeat than, “Tink, tink, click, click, tink, click click,” it would have made for a wonderful pop album, no catches and no caveats.      5 out of 10 on The Rockometer.