The Rockometer: The Monitor by Titus Andronicus 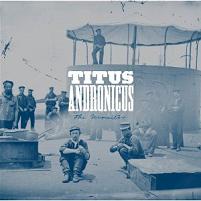 Three months pass and the young, spunky, punk-ish band returns with a completed album.  It’s called the Monitor and from the first minute it’s apparent they didn’t pay attention to one single word I had previously said.  It has rambling, mind to mouth narratives like an over-eager Bright Eyes, sections of workingman punk recalling The Dropkick Murphys and bleary eyed pub ballads worthy to be mentioned along side The Pogues.  There’s screaming guitar solos, triumphant horns and marching band beats.  The lyrics borrow from Billy Bragg, Bruce Springsteen, and old battle hymns, sometimes it’s done subtlely other times more overtly.  It screams, shreds, ramble-tambles, rollicks and rocks for sixty-five minutes.  And oh yeah, there’s lots of civil war imagery.

I look at the young, spunky, young, punk-ish band in my office, Titus Andronicus, and admit I was wrong, this time, and I tell them, “Next time, guys, how ’bout some three-minute songs about women, booze, rockin’ out and throwing up in your best friends bath tub — Not a whole album, mind you, but maybe just a couple tracks to break up all the six and seven minute stuff.”  8 out of 10 on The Rockometer.

The Monitor by Titus Andronicus will be out tomorrow, March 9th on XL/Beggars.  The band will be in town for a very special in-store performance at My Mind’s Eye Records in Lakewood that night at 7PM.