The Rockometer: The Brutalist Bricks by Ted Leo and The Pharmacists 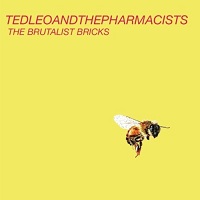 Ted Leo and The Pharmacists
The Brutalist Bricks
Matador

The Brutalist Bricks isn’t Ted Leo’s most stylistically consistent album.  That would be 2004’s Shake the Streets, an album where he and the Pharmacists were relentless in the way they bashed out power pop jams.  Nor, is The Brutalist Bricks Leo’s most aggressive outing.  No, that would be 2007’s Living with the Living, a set  laden with anti-war themes whose agenda was apparent by browsing the tracklist and seeing such titles like “Sons of Cain,”, “Bomb Repeat Bomb,” “The Lost Brigade,” and “C.I.A.”  Yet, whatever The Brutalist Bricks may be missing in cohesion or aggression, it more than makes up for it by being Leo’s most vital effort since his breakout album, Hearts of Oak.

Like Hearts of Oak, Leo’s latest is a diverse album.  In addition to the standard Pharmacists sound — A mix of new wave with Thin Lizzy styled shots of rock — there are funky elements (“One Polaroid a Day,”) dub and drum ‘n’ bass (“Mourning in America,”) a garage rock stomper (“Where Was My Brain,”) and a surprisingly soulful Leo exercising a forceful vocal range on “Woke Up New Chelsea.”  Still, the unquestioned highlight of the set, “Bottled Up in Cork,” is a number which doesn’t expand on the band’s repertoire, but instead recalls one of their earlier successes.  As a traveling song, it’s easy to draw parallels between “Bottled Up in Cork” and Hearts of Oak’s “Ballad of the Sin Eater.”  Both recall Leo’s experiences as an American on foreign continents, albeit with two striking differences.  First, in the place of “Sin Eater’s” rough, rumbling bass line is a sweetly strummed acoustic guitar.  Second, and more importantly, Leo no longer faces ridicule and derision at every stop.  Instead of puzzling over his reception with the chorus, “You didn’t think they could hate you now, did ya?” as he did on “Sin Eater,” he now revels in hospitality with lines like, “A little good will goes a mightly long way,” and “Tell the bartender, I think I’m falling in love.”  It’s a striking recovery in mood and melody for a man and a band who managed to break a string of average albums (By their own high standards) on the strength of one joyful chorus and a rediscovered lust for life.  9 out of 10 on The Rockometer.

Ted Leo and the Pharmacists will be in Cleveland for a show at the Grog Shop on Thursday night, March 11th.  Title Tracks will open.