“I’ve Got a Feeling (That Won’t Change)” by Sweetapple 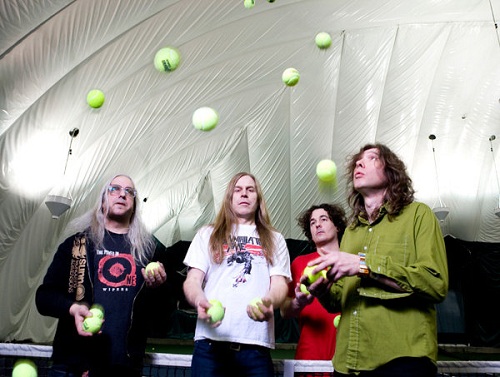 With the second track from their forthcoming album now free on the internet, the methods of Sweet Apple should be abundantly clear.  Cobra Verde’s John Petkovic didn’t hook up with J Mascis, Tim Parnin and Dave Sweetapple in Vermont to lament his recent bout with bad times and feel sorry for himself.  Oh, that may have been his initial intention, but once there he rediscovered his passion for music and realized he could  exorcise all those troubles through the power of Rock ‘N’ Roll.  Granted, it sounds cliche to say such a thing in this day and age, but one listen to “I’ve Got a Feeling (That Won’t Change)” and its positive burst of energy, cracking guitars, and bristling melodies, and the only conclusion one can draw is outdated rock cliche or not, these dudes are on to something big with that old Rock and Roll can save your mortal soul attitude.

MP3: Sweet Apple – I’ve Got a Feeling (That Won’t Change)

Sweet Apple’s debut disc, Love and Desperation, will be out April 20th on LP and CD on Tee Pee Records.